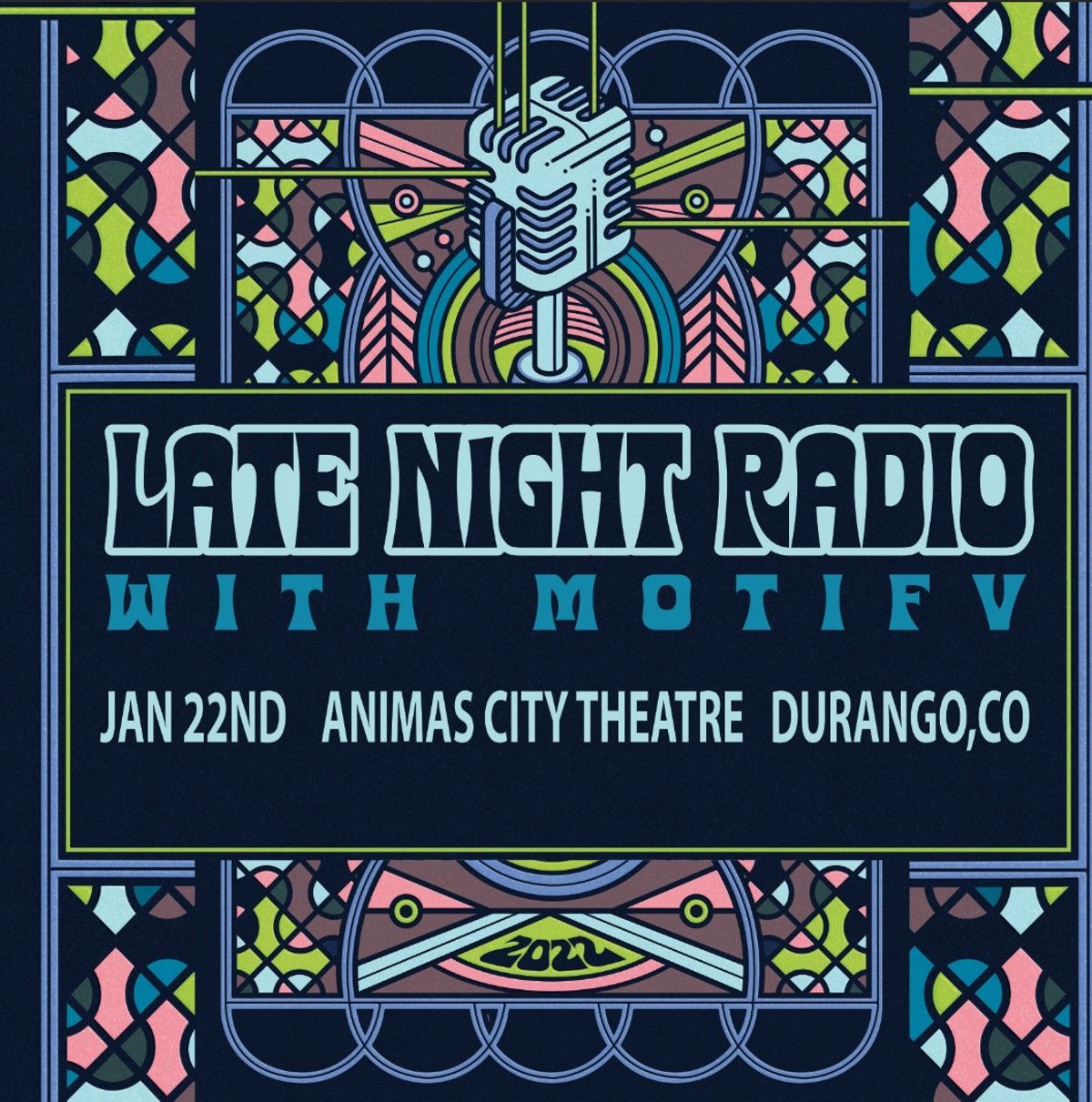 Animas City Theatre Presents
Late Night Radio with Motifv
Tickets on Sale Now
18+ / $18 / $20
Attendees must wear a mask upon entry until providing Proof of vaccination (Physical card or picture of card on phone is accepted) or a negative PCR test with 72 hour time stamp.

Alex Medellin aka Late Night Radio is a Denver-based musician, producer, and pillar of the Colorado electronic music scene. His unique hybrid electronic sound is inspired by classic soul and third coast hip-hop, paying tribute to the sounds of the past while seamlessly ushering in the sounds of the future

“The easiest way to describe my music is, ‘Electronic music for people who don’t really like electronic music’,” Alex explains. “There’s hip-hop bass and beats, which keep it relevant. However, I’m taking it into new territory.”

It’s also a style he’s been working towards perfecting for nearly a decade. The Houston native bounced from New Orleans to Austin to Temecula and eventually Big Bear. During 2011, he started composing music for online videos and commercials before relocating to Colorado and seriously pursuing the art as a career, going full-time in 2014. Along the way, he released a series of fan favorite EPs—Concrete College [2012], Far Into the Night [2013], Soap Box [2014], and Reflective Tangents [2016]. The latter yielded “Find the Love” [feat. Borahm Lee], which clocked over 1.3mil Spotify streams as the EP cumulatively tallied 3 million-plus. Emotionally charged and explosive live sets transformed Late Night Radio into a Denver sensation

Through nationwide tours with GRiZ, The Floozies, Gramatik, Lettuce, and BoomBox, Late Night Radio expedited his position at the forefront of electro-groove. His performances at Red Rocks Amphitheatre, Electric Forest, Shambhala, Hulaween, and Camp Bisco have intoxicated attendees from all walks of life. Praised by tastemakers like Live For Live Music, EDM.com, EARMILK, and many more, it’s no secret that the visionary producer is crafting something unique. Having clocked in at #1 on HypeMachine’s popular remix chart with his official flip of Break Science’s “Anthemy Mason” and a #1 slot on Canadian College Radio Hip-Hop charts for his production work on Def3’s Small World album, his steeple-sized influence has transformed into something both atmospheric and quantifiable.